Biograd is a city in the Mediterranean northern Dalmatia in Croatia.

Biograd is the former capital of the Croatian Mediterranean Kingdom. Along the coast, it’s a mecca for sailing and tourism.  Zadar County administers the region, and the town’s population is over 5,500. It lies on the Adriatic coast, overlooking the island of Pašman, on a small peninsula surrounded by two sunny bays. Sailing boating and charter holidays form a major part of the economy. 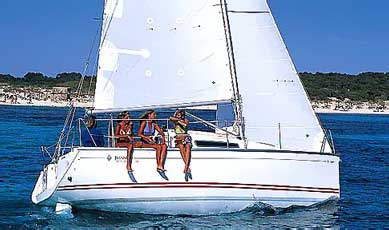 Biograd is 28 km south of the county capital of Zadar.  Also nearby, are Sukošan, Vodice and Šibenik. In front of the town are the Mediterranean islands Planac and Sveta Katarina. The average temperature in January is 7.3 °C but rises to a comfortable 23.9 °C in July.

The city of Biograd is first and foremost a tourist resort. The first tourists started arriving during the 1920s from Czechoslovakia, and its first hotel was built in 1935.

The town’s native Croat name fully translates as “The white town on the sea”. The name Biograd means “White city” and etymologically corresponds to several other toponyms spread throughout the Slavic-speaking world. Biograd was first mentioned in the 10th-century as a town founded by the Croats.

During the wars between Croatia and the Republic of Venice, the town was captured for a short time by the Venetians.

During the 1050s, Biograd was the seat of the Roman Catholic Diocese of Alba Maritima, a suffragan of Salona, until its 1226 suppression. The city grew considerably during this time. The nearby 9th-century Cathedral was expanded to include a bell tower and the southern part of the walls. The function of the Prior (head of city elected by its commune in Dalmatia) is attested.

Biograd bishop Bono crowned Coleman of Hungary as King in 1102. Following this, the Kingdom of Croatia passed on to the Hungarian people. In subsequent years, its rule changed between Venice and the Arpad family. It is at this point in history that the city is mentioned as a “Royal city”.

The Republic of Venice acquired the city around the year 1115, then destroyed the city walls towards the sea. They had the idea it would “for all time remain in possession of the Serenissima”. Stephen II of Hungary eventually reconquered the region in 1124.

Destruction of the city

The Venetians conquered once again In 1125. The Venetian Doge ordered the destruction of the city because of its dangerous vicinity to Zadar. According to the Historian Ducum Veneticorum, only Biograd Na Moru citizens dared resist the Doge and his army. The city was razed to its foundations during his reconquest of Dalmatia. The invaders plundered the entire city centre, the royal palace, monasteries and churches. Many of the local monks fled to the nearby Mediterranean islands of Tkon and Pašman. The Biograd bishopric abolished its territories and handed over to the Bishopric of Zadar as spoils of war. The population, including the bishop, moved to Skradin.

The Venetian-Turkish wars caused severe damage. On two occasions, in 1521 and 1646, virtual destruction and complete burning of the city ensued in the 16th and 17th centuries, the Croatian militia formed in Biograd. Subsequently, they had much involvement in the wars against the Turks.

In recent history, the Serbian armed forces inflicted massive damage by long-range bombardment in 1991-1993 during the Croatian War of Independence.