Göcek a small town in the Fethiye district in Muğla Province, Turkey. Well known for sailing and yacht charter holidays.  It sits between the Mediterranean towns of Fethiye and Dalyan on the Turkish Riviera. Because of its location in a sheltered bay, the port enjoys many visitors, most of whom come to enjoy sailing. 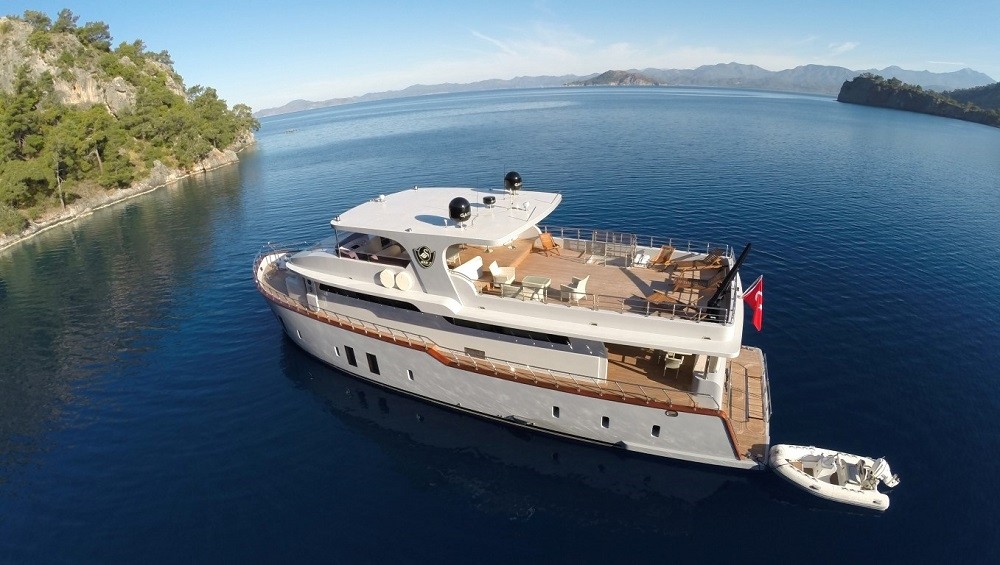 The coves and Mediterranean island of Göcek form a hidden paradise, with fresh green pine forests, clear Mediterranean water, and attractive beaches. Amongst these is the long sandy beach of Sarıgerme. Beyond Sarıgerme is the protected beach of Iztuzu in the Mediterranean Dalyan Delta. In the opposite direction is the famous beach at Ölüdeniz. The port´s promenade has many good quality restaurants, cafés, and bars.

In 1988, Göcek was declared a Registered Area of Special Protection. Göcek benefits from the necessary infrastructure, capacity, and amenities expected in a Mediterranean centre for tourism. However, it remains charming and more secluded than some other Mediterranean touristic areas of Turkey.

The town was named “Kalimche” in ancient times. According to Greek mythology, Icarus landed in the sea close to Göcek after his famous flight. Icarus was the son of Daedalus, a master craftsman, the creator of the Labyrinth. They attempted to escape from Crete using wings that his father constructed from wax and feathers. Icarus’ father chastised him for his complacency and then for his excessive pride. He asked Icarus not to fly too close to the sea to avoid dampness from the water clogging his wings. He also asked him not to fly too high to avoid the sun’s heat melting them. Icarus ignored his father’s instructions. When the heat melted the wax in his wings, he fell out of the sky and plunged into the Mediterranean sea, where he drowned. Thus the origin of the saying, “Don’t fly too close to the sun”.

Göcek became known to artists, poets, and fishers from Bodrum to cruise along the Mediterranean Turkish Turquoise Coast. This journey later became called the “Blue Voyage”.

In winter Göcek’s average maximum temperature is 14 °C. In summer, the average is 34 °C, with highs of 40 °C. The sun shines for more than 300 days per year. The Mediterranean climate allows for the growth of sweet tangerines and oranges together with juicy lemons, for which the town is famous.