Fair winds and stunning scenery – Turkey ticks all the boxes. Marmaris is an ideal starting point to cruise around the Mediterranean coast and islands. 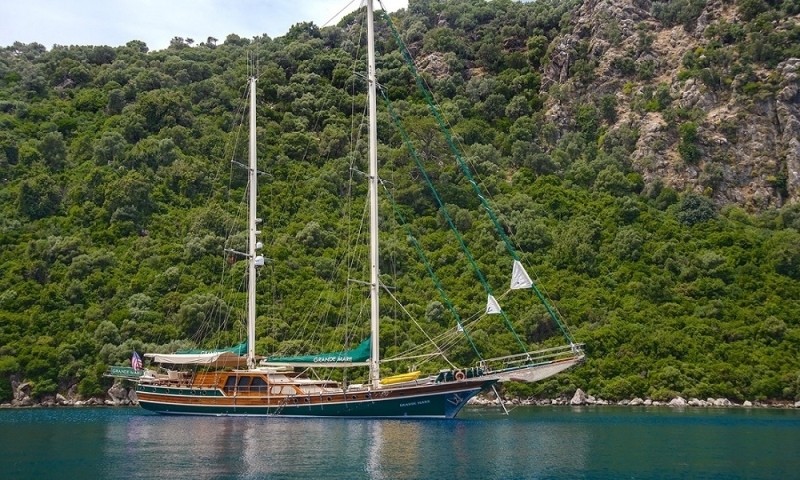 You have probably heard that sailing in Marmaris is extraordinary for a bareboat charter. Turkey has a unique charm and is very different from other countries in the Mediterranean.

Marmaris offers variety, local hospitality, and fascinating history. The sailor’s bonus is that it sits on two other seas as well as the Mediterranean. Find a discount Yacht Charter in Marmaris below. Please call us for more information.

Modern marinas, sheltered anchorages, fair winds, and stunning scenery – Turkey ticks all the boxes. Marmaris is an ideal starting point to cruise around the coast and islands.

Turquoise seas surround Turkey on three sides. To the south, the Mediterranean Sea. To the north, the Black Sea, and looking west, the Aegean Sea. If you want to navigate further afield, the Greek Islands are only a few miles off Turkey’s west coast.

Dalaman airport is very centrally located, allowing a choice of any of the sailing resorts in Turkey. It is a 1 hour, 15 minutes drive away from Marmaris.

Marmaris town sits next door to the magnificent Suleyman Castle. Narrow winding streets draw you into the bustle of the bazaar. The pretty waterfront offers traditional Gullets for boat trips to the beaches and popular dive sites.

The maritime history of coastal Turkey is almost as old as the art of sailing itself. Accordingly, in the Underwater Archaeological Museum in Bodrum, the remains of the world’s oldest known shipwreck. The wreck was discovered close to the small Mediterranean seaside village of Kas.

The city´s name derives from the Turkish word “mermer” and the Greek word “màrmaron”, both meaning marble. The export of marble through Marmaris port was the principal income for the region in ancient times.

The Sultan, Suleyman the Magnificent, set out to conquer Rhodes using the city as a base for the Ottoman Navy. Consequently, battles caused extensive damage to the town. After the events, the total rebuilding of the castle took place in 1522.

Lord Nelson and his fleet sheltered in the city’s harbour, using the castle as a shore base, in 1798. Nelson was en route to Egypt during the Mediterranean campaign to defeat Napoleon.

Heaven Island is a small peninsula a few kilometres from Marmaris. Heaven is connected to the mainland by an isthmus. On the island, Nimara Cave is well worth a visit. Since ancient times, people used the cave as a place of worship. Herodotus, an ancient Greek historian, noted evidence of humans in the cave, dating back to 3000 BC. Modern research suggests the existence of an ancient cult in the area. The idol worshipped as the Goddess Leto, mother of both Apollo and the Goddess Artemis. At the cave site, ancient stone altars surround a large rock in a semi-circle, raised about 30 cm from the ground. Signs indicate the placement of offerings to Leto on these stones. Archaeologists discovered glass beads, terracotta pots, and evidence of cremated animals together with sculptures of Leto. Nimara Cave is now a protected area.

Additionally, near Marmaris lies the tomb of an ancient Greek boxer named Diagoras. A recent discovery changed local beliefs that it was a Holy site – a saint´s grave. The newly uncovered words inscribed on the tomb: “I will be vigilant at the very top so to ensure that no coward can come and destroy this grave” led to the new opinion of the tomb´s occupant.

The Turkish coast and has a typical Mediterranean climate. The hot summers are from June to the end of August. During the season, temperatures range between 28 and 35°C. The sun shines about 300 days/year. Even in October and November, most of the ti of Turkey is fairly warm and perfect for great sailing. The area has the most extended sailing season in the Med.

This Aegean region around Marmaris experiences the strong Meltemi winds during most of the summer. Up to 25 knots, Meltemi winds blow west along the coast. So this is an excellent place to hone your tacking skills if sailing westward! The water temperature is between 25°C and 28°C in summer.

If you are a novice sailor, sailing to the east will find you considerably weaker winds. The best option is often to hire a skipper so you can enjoy the thrill of a good gust on the water while someone else does the work!